Float Offering at the Festival of Lights

Loi Krathong or Loy Krathong is truly a spectacular floating festival of flowers, candle lights and incense sticks. It's celebrated throughout Thailand every year during the night of the full moon in the twelfth lunar month of November.

If you are going to take a holiday break anywhere in the country at this particular time of the year, then you really must take the opportunity to join in on this joyous occasion. It is one of the best festivals in Thailand and should not to be missed.

Not only do the locals living here display their utter enthusiasm in celebrating the spirit of this festival, but you as a tourist are more than welcome to participate in this fantastic event.

Krathong symbolises a time for one to cleanse past sins and seek renewed happiness for the new year. It's a special time too when married or engaged couples are blessed so that they may prosper in the upcoming year.

The word Loi simply means to float and Krathong is the word used to describe the lotus-shape floating vessel. The modern Krathong floats are more likely to be made out of Styrofoam.

However, they are often discouraged by the locals as they tend to pollute the lakes or ponds on which they are set free. Please be aware that they can also take years to dissipate, that is to say, if they ever do.

The traditional banana tree trunk floats are biodegradable therefore they are a much better option. If you want to participate in the event, rather purchase one of the banana varieties. You'll be doing the ecosystem a very, very big favour. Having said that, would you like to see how you can contribute to an Eco Friendly Thailand?

A bread float is also a favourable alternative as this form of the float will eventually disintegrate anyway within a day or two, especially if it is eaten by fish or any of the other creatures that often roam the rivers or lakes on which you let it float.

Balloon Lanterns released into the Sky 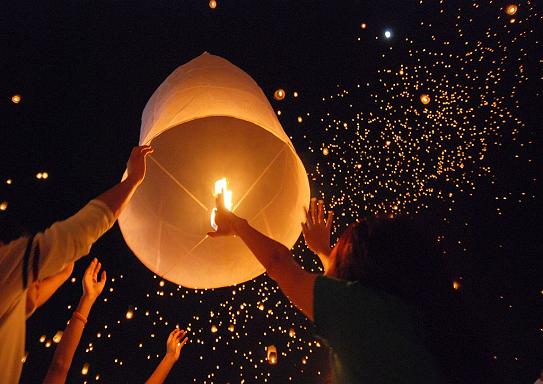 Regardless of whichever float you decide to choose, your Krathong will certainly be adorned with intricately folded banana leaves, flowers, candles and incense sticks. As an extra way of making merit, why not include a low-value coin as an offering to the river spirits. After all, it's all for a good cause. You never know, you could be justly and richly rewarded for your effort at a later stage.

Apart from this special Krathong ceremony, which renders homage to Lord Buddha with thousands of candle light, the very act of floating the candles on small rafts made out of mostly banana leaves and decorated with fresh flowers, is symbolic of letting go grudges, anger and attachments.

Thai devotees also believe that by floating these rafts in honour of Phra Mae Khongkha, the Goddess of Water, it will bring good luck to all those who partake. So go right ahead and float your boat.

Loy Krathong is also known as the festival of lights with Thai locals, monks and tourists alike in all regions of the country releasing balloon type lanterns into the night sky in the hope of bringing good fortunes to any sphere of their lives. For many, it's a ritual which simply requires you to light a candle, make a wish  and then set yourself free on a spiritual journey to happiness.

At many of these spectacular events you'll get to see thousands of people with beautiful offerings in hand gathering beside canals and rivers, under bridges, outside temples and anywhere else for that matter, just enjoying the moment.

Loi Krathong Festival on the River

You really should go out and celebrate this exhilarating festive occasion. Go light a candle and an incense stick, place a coin, secretively make a wish and slowly release your offering into the water and watch it float gently downstream. It is believed that the longer your candle can stay alight, the stronger your desires and fulfilment will be achieved. Some say you could be freed from your sins too.

It is also believed that the practice of Loi Krathong first originated in the ancient kingdom of Sukhothai during the 13th century. Legend says that at the time the young queen Nang Noppamasa fashioned a tiny boat adorned with candles and incense and then floated it downriver. It has since become an annual event.

One of the best places to experience and celebrate this amazing event is in the Sukhothai and Ayutthaya provinces, but also cities like Chiang Mai and Bangkok are also excellent choices to go out and celebrate in grand style. However, you're not going to miss out in other places around the country, including the east coast around Pattaya and the southern islands around Phuket.

Though Loi Krathong was thought to have started its journey in Sukhothai, the celebrations there are so much more spectacular, and with the added bonus of a light and sound show held in the Sukhothai historical park, it just can't get any better than that.

Loi Krathong Offering on the Water

What better place to float your tiny boat than at the Loy Krathong Festival in Chiang Mai. Here it's known as Yi Peng. The excitement doesn't end there either as you'll get to see some of Thailand's largest floats being paraded down the main streets atop several trucks as they make their way towards the river.

It's an absolute glittering affair of note. Also, don't miss out on the Thai dancers as they perform their dutiful roles during these fabulous festivities.

Watch in amazement the spectacular kaleidoscope of candle light as thousands of large-scale floating lanterns known as ﻿Khom Loi, ascend towards the heavens while lightening up the night sky.

Merry monks from temples in the region release these balloon-like lanterns as do many of the locals from their homes around town. It's thought that misfortune and bad spirits will drift away.