The Temple by Night 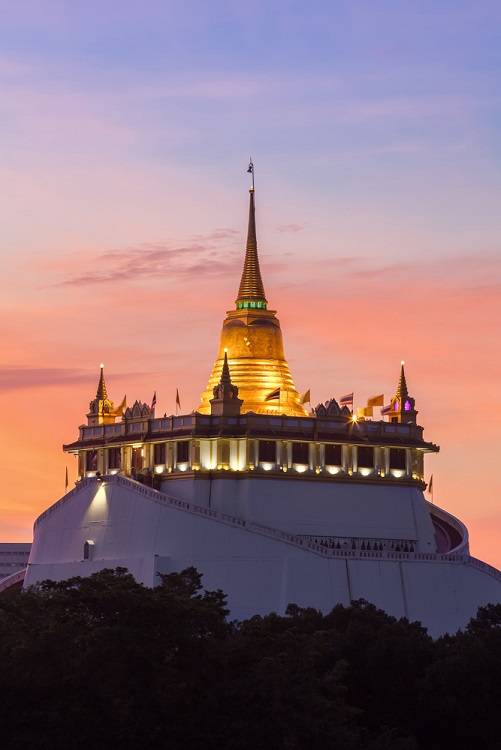 The nineteenth-century structure known as the Golden Mount is one enormous gleaming gold Chedi and clearly one of the most distinctive landmarks in Bangkok. It sits serenely atop an artificial hill across the road from the Wat Rachanadda and within the grounds of Wat Saket, one of the oldest temples in the city.

It was at this particular time that the grounds of Wat Saket once served as a crematorium where the corpses of common people were often dumped after becoming infected with cholera. Sometimes their bodies were left outside for the vultures and stray dogs to devour. A kinda macabre function of sorts no doubt.

Apart from the daily prayers being held here, and by a complete contrast to the past, the temple holds an annual fair during the first week of November. If you're fortunate enough to be here at this time, then you'll be entertained with a variety of dancing and travelling performers. The mount is illuminated with coloured lanterns and the compound is alight with typical Thai hospitality.

Panoramic View from the Golden Mount

I would like to start here by giving you just a little insight into how this historical site originally began its development. Wat Saket was the first to be built here by Rama I in the late 18th- century.

Thereafter Rama III built the first golden tower, but unfortunately, because it was created atop a man-made mountain and being on the soft ground, it soon collapsed. It was only after King Chulalongkorn (Rama V) provided all the necessary technical skills, that the present 78 metre (256 foot) tower came about. The tower today is known as the mystical Mount Meru. Buddha relics presented by the Viceroy of India are believed to be housed here.

Close up of the Golden Chedi

Although the mount is currently dwarfed by several modern skyscrapers, it was until the 1960's, the highest point in Bangkok. It does, however, afford you some magnificent panoramic views over the city, especially that of the Grand Palace, Wat Pho and Wat Arun. You could even pretend to be king of the castle here.,

Before this can happen, though, you'll be required to climb the 344 steps by way of a circular staircase of which there are two sets. One is to the north and another is to the south. Either set of stairs will do because both eventually lead to a sanctuary at the top the mountain. It's the only way to go so do take your time.

There is really no need to hurry and besides, there is plenty of interest along the way as the staircase is lined with plenty of small strange monuments and tombs. The surrounding hillside is also thickly covered with overgrown trees and shrubs.

Panoramic View over the City from the Golden Mount

Other Great Temples you may like to Visit in Bangkok

If you enjoyed visiting the grounds of Wat Saket you may also want to try some of the other fascinating temples and complexes in Bangkok.

Directions to the Golden Mount