Now is a golden opportunity to visit Doi Inthanon National Park in Chiang Mai's northern province of Thailand. And this should surely be on your cards when touring this enchanting and beautiful land. For it is here where you will experience a place on earth like no other.

Not only will you get to be on some of the highest mountains here, but you will also be able to explore some of the best walking and hiking trails. In addition, you'll get to see the tallest waterfall, paddy fields, grand temples and that's not excluding several hill tribal villages.

The mountain is largely a granite monolith shaped from the southern portion of the Shan Hills range that forms the divide between the Nam Mae Ping river to the east and the Nam Mae Chaem river to the west. On the lower elevations in some parts of the park are limestone formations that contain a number of caves.

Doi Inthanon was known as Doi Luang which means Big Mountain or Doi Ang Ka which means Crow's Pond. Big mountain is not hard to understand, but Crow's pond! Well! That's easy enough to explain too! Near the base of the mountain was a pond where Crows used to gather. Now can anyone tell me if they still do? Come and join a full day small group tour to the highest peak of  Doi Inthanon National Park in Northern Thailand. This is a great opportunity to enjoy the beautiful scenery, visit the Stupa at the high of 2,000 meters above sea level and see the panoramic view of the national park.

After lunch, you'll get to visit the Wachiratharn Waterfall where you'll go trekking along a natural trail of the forest that passes the waterfall and finally stop by at a Karen Hill Tribe village. For this tour, you'll be collected from your hotel between 8:00 am and 8:30 am. For more details on this tour, see the link above.

The name Doi Inthanon was given to honour King Inthawichayanon who was one of the last kings of Chiang Mai. He was concerned about the forests of the north and made sure that they were well cared for. In doing so, the forests have since flourished to this very day. The king's remains were buried here after his death.

In the mid-1950's the area became a National Park and grew considerably in size during the mid-1970's. It now covers many climatic and ecological different parts and has the second highest number of bird species of any Thai national park.

If you should decide to go all the way to the top, you will find the stately Chedi erected in honour of the present King and Queen of Thailand. From here you will be afforded some magnificent views of the surrounding hillside, fauna and flora. 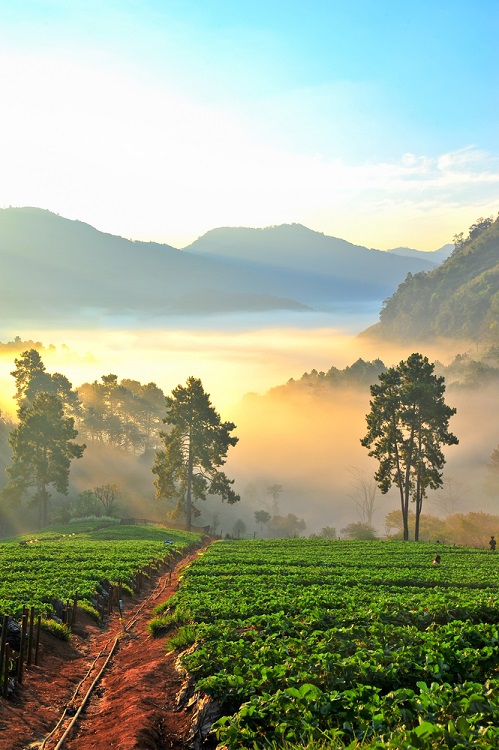 One of the most breathtaking waterfalls is Mae Klang Waterfall which you'll find right beside the park entrance. It's easily accessible from an area where cars, buses and bikers park. This one cascades down hundreds of metres of rock face before entering a stream or river of sorts. It's a popular place to be.

Lots of Thai visitors come here for their weekend picnics. You will find them relaxing on roughly made loungers gently hanging over the river. This is a great spot where you can also stop over for a bite to eat at one of the stalls selling cool drinks, fresh fruit, barbequed chicken or whatever else takes your fancy.

Siriphum Waterfall is another spot that runs up the mountain close to the main road where you can go swimming. It is near the ranger's station and a campsite. Drive further up the mountain on the way to the peak and you will see numerous waterfalls on both sides of the road. Probably the most spectacular to explore is the Mae Yai Waterfall which cascades down about 100 metres of the rock face.

Halfway up or halfway down (whichever way you see fit) Doi Inthanon is the Wachiratan Waterfall which plunges over a 40-metre drop and cascades down to a cool pool where you are welcome to take a plunge and enjoy a great swim.

The Karen Hill Tribe Village at Ban Pha Mon is well worth a visit where you will get to see some of the young girls weaving brightly coloured cloth which you are welcome to purchase. Just up the road from the ranger's station is a Hmong Hill Tribe Market, which sells produce from the Royal Project and Hmong villages around Mae Chaem. Actual Hmong hill tribe people live there and it is worth a stopover to see and photograph their colourful embroidered clothes.

The park is a one and a half drive south-west of Chiang Mai and covers an area of 48,240 hectares. The lowlands below 800 metres can be somewhat warm and often very dry during the rain-free season, but the summit at 2,565 meters has a much cooler climate. During much of the year, the temperature at the top has an almost alpine sub-zero feel to it and it is known to drop as low as minus eight degrees Celsius at times. Even frost is not unusual during the cool, dry season.

January is the coldest month of the year when temperatures can get as low as five or six degrees Celsius. Even rainfall can be considerably higher at altitudes above the 1000 metre mark than in the lowlands. During the dry season between November and April, there can be persistent mist, cloud coverage and occasional rain for parts of the day. This may be a comfort from the heat of the lowlands.

You may also like to visit these National Parks